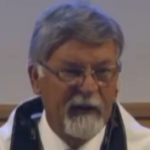 v1 – “My God, My God, why have you forsaken Me” is a prophetic utterance of Yeshua’s cry out to the Father from the cross. He felt the absence of the Father because He had been made sin (2 Corinthians 5:21) as a substitutionary sacrifice for the remission of sins of the world since God cannot look upon sin (Habbakuk 1:13); but He does not forsake us as He did momentarily forsake the Savior. He waits patiently though for us to come to Him properly with confession and repentance.

v2 – Yeshua cried out to God, the Father, in Gethsemane when it would be the pleasure of the Father to crush Him (Isaiah 53:10). It was us and our sin that killed Jesus.

v5 – He wants to answer our prayers, to deliver us, to have a personal relationship with each of us and for us to seek Him first in our lives.

v6,7 – The tolah worm climbs the tree to die and provide life to its young with its own blood that stains the tree.

v10 – Jesus was born of a virgin. v14 – His bones are out of joint and His blood poured out speaks of the crucifixion.

v16 – They pierced His hands and feet.

v25 – He promises to fulfill all of His vows.

v30 – Firstfruit believers will serve Him in the millennial reign as death continues until its end.

v31 – They will teach others, proclaiming His righteousness. Ezekiel 44:17-19 says that they will minister and Revelation 22:2 says they will heal the nations.